Some bunny to love

I did not see Space Jam, the bizarre 1996 movie in which Michael Jordan played basketball against Looney Tunes characters, including Bugs Bunny. I never had the desire to see it, and I never even considered that a sequel would be in order. But this is America, and so of course - 25 years later - we need a sequel.

I have no intention of watching the sequel, either.

Ironically, I have met Michael Jordan and he is a very gracious and down-to-earth human being, especially considering he has spent the majority of his life under a microscope.

So what am I getting at here? The latest cries for and against cancellation have arisen from leaked imagery showing that one of the characters from the original movie, Lola Bunny (yes, the name of that stripper from the place that time, the one who really, honestly liked you – it wasn’t about the money at all), has been altered in the sequel to not look like a hooker.

I realize that sounds harsh but see for yourself: 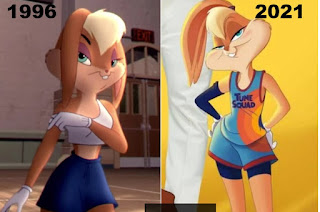 The sequel’s director was quoted as saying, "This is 2021. It's important to reflect the authenticity of strong, capable female characters."

Critics of the move have responded: “It’s a cartoon rabbit, you snowflake twit!”

So I’m not going to get preachy here, and I won’t be dismissive, either. Instead allow me to split the difference.

On the bordering-on-preachy side, I think it needs to be said that the systemic objectification of female characters in our entertainment industry is limiting, and probably harmful in a number of ways. For one thing, it paints women through the lens of the white men who have typically controlled the overall creative output of the Western world. I’m not saying white men have an ax to grind or an agenda, hidden or otherwise; some people would say that but I am not making that particular argument. I’m only saying we view women in entertainment primarily from the perspective of the screenwriters and directors, who are overwhelmingly white men.

And in that regard it’s not a matter of how women LOOK in movies and TV, but something more subtle and harder to spot (for us white guys).

Those who are versed in the Marvel Cinematic Universe know well the tale of Natalie Portman, a gifted and acclaimed actress, and how she ran screaming from the MCU after 2013's Thor: The Dark World, not interested in continuing the thread of her scientist character, Jane Foster. One of the reasons cited was that Wonder Woman (2017) director Patty Jenkins was originally tapped to direct, but after Natalie signed on to the project, Jenkins was replaced by Alan Taylor. This made a pretty big difference to Natalie and, considering the success of Wonder Woman and the fact that the second Thor movie is widely judged to be the loudest clunker in the MCU body of work, her instincts were likely on point.

Let’s be fair, shall we? Cartoons have always, always, always depicted women as robust, buxom, scantily clad and provocative. Take a look at the original cartoon versions of some of the characters we’ve come to know and love in the MCU: 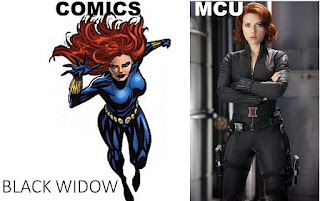 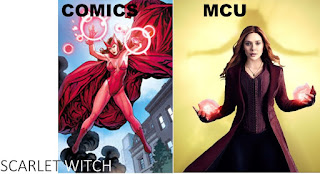 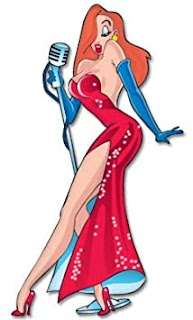 In the groundbreaking 1988 film, Who Framed Roger Rabbit, the titular character’s cartoon wife, Jessica Rabbit, not only leaned into the hypersexualization of her character, but saw fit to joke about it, telling Eddie, the human protagonist, “You don't know how hard it is being a woman looking the way I do. I'm not bad. I'm just drawn that way.”

If debating big boobed cartoon animals is too meta for you, let’s look at something a little older, a little more fundamental, and probably more telling: Gilligan’s Island. 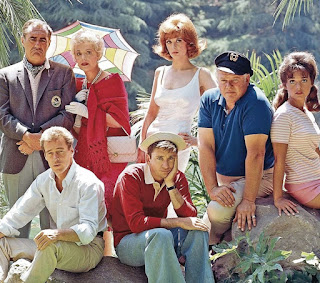 On the island with Gilligan were the following women:

And AH-HAH – there’s the point. On the show, there were two women and they were frequently paired up – not in a sexual way, this was 1960s network television! – with male counterparts. They were always paired up with the same men: The Skipper, clearly a man’s man with little formal education and a fair amount of road miles on him, always aligned with Ginger. And why not? Ginger was a movie star, and in the 60s it was arguably blue and gray collar men who determined who would become the next Marilyn Monroe.

The Professor was always aligned with Mary Ann, underscoring the idea that the smart, cute, plain, practical woman was always the wise choice. You can chase your fantasies, but the smart money long-term is on the girl with pigtails and dirt on her hands.

Now, tell me we haven’t been raised on a concept of women as perceived through a white guy filter!

So where do I come down on the Lola argument? Do I want a hot piece of cottontail in my cartoons, or am I ready for a new, liberated, modern day girl cartoon rabbit? I mean, now that we’re talking about it, what if Lola is transgendered? Or non-binary? What’s the right way to depict that? (And more importantly, which Gilligan character would be aligned with a non-binary character? Think about that one and get back to me!)

I guess I am in favor of variety, of seeing characters and plot and themes – even in animation – through a number of filters, from a number of different perspectives. I do not see that as anything but positive, but I recognize there are people who disagree. There are people, with increasingly loud voices, who want sexy cartoon bunnies redacted from history, and their creators shamed and banned for their heresy. I am not of this mind.

Last week, Disney announced they would append 18 episodes of The Muppet Show that contained, in their opinion, negative characterizations. I wrote about it here. Then, earlier this week, the organization that continues to publish Dr. Seuss books announced they would cease distributing several titles, “because of racist and insensitive imagery.”

See the difference? Disney says, “We are looking at this material, created 40 years ago, and we recognize that through a 2021 lens it is not appropriate. It’s not what we want to be, and it’s not what we want our children to become.” But they maintained the work and simply called out the shift in context.

I like that approach far more than the policy of banishing work and cancelling authors and artists. Now, to be fair, the audience for Dr. Seuss books is exclusively very young children and I can appreciate the proactive stance of the publisher itself to not want to perpetuate those negative stereotypes, as well as not be associated with them. I’m not calling out the Dr. Seuss people; I applaud their thoughtfulness.

But if, tomorrow, someone comes out with a new cartoon movie starring Mel Gibson as a street cop nearing retirement and a buxom, cartoon Siamese cat hooker with a heart of gold who is his soulmate, I say bring it! I’m not saying I would see it; I would have no interest. But some people might, and that, I think, is appropriate. Let’s see everything, let’s broaden our perspective instead of narrowing it. Let’s be uncomfortable now and then.

I mean, fair is far. Women have been uncomfortable all this time, and they seem to be doing okay.

July 07, 2021
Bless me readers, for I have sinned. It's been 90 days since my last post. I feel bad about it but don't worry - not bad enough to bore you with all the carefully reasoned rationalizations for my absence. But I had to take TWO STINKING MINUTES out of my important work day to let you know that the former president, who Spike Lee refers to as "Agent Orange," (that's funny, I don't care how you vote!), is suing big Social Media, and their CEOs as individuals, for censorship. In particular the article reads , "The three related lawsuits, filed in federal court in Florida, allege the tech giants have violated plaintiffs’ First Amendments rights." Those of you who read even one of my three-part series in April about this very topic will remember, "The First Amendment doesn’t guarantee any of us unrestricted speech. It only protects us from government censorship. Said another way, neither the Constitution nor the Bill of Rights says you have the legal
Post a Comment
Read more