March 10, 2021
In the criminal justice system, gun-crazed, power-hungry members of Congress are considered especially heinous. In Washington, DC, the most notorious of these may be freshman Representative Lauren Boebert from Colorado. This is her story. GUNG-GUNG! 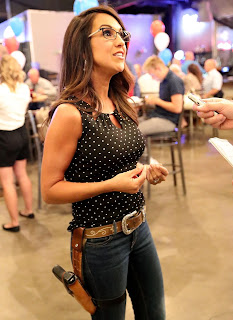 Ladies and gentlemen of the jury, I come before you today to ask your judgment of United States Congresswoman Lauren Boebert.

Congresswoman Boebert is on trial for her ongoing, unrepentant promotion of violence and lawlessness in our nation’s capital and across the country, which she claims is a crusade for freedoms being systematically removed by elected Democrat legislators and executives, including the President. During this trial I will attempt to prove that Congresswoman Boebert, AKA Lock-and-Load-Laurie, AKA Klannie-Get-Your-Gun, AKA QAnon Barbie, AKA Sarah Palin II: The Revenge, has conducted herself in a manner that should, by law, remove her from her elected post and exclude her from future public office.

Whether or not you lock her up, that’s completely your call. I would, but whatever.

The following facts have been stipulated and are hereby entered into evidence:

So clearly, ladies and gentlemen of the jury, Ms. Boebert is a liar and a bully, either willfully dishonest or completely deranged. But that is not what brings us here today.

This week, Lauren Boebert posted a video on Twitter themed, “you protect what you love.” In it she compared Donald Trump’s failed border wall (GOOD!) with “Nancy Pelosi’s” fence around the Capitol building, erected after Trump supporters stormed the building in an attempt to intimidate legislators and – potentially – capture and assassinate Vice President Mike Pence (BAD!!!). The video is actually very well done; the production value is superior, even though the fundamental premise could only be called batshit crazy.

Aligning herself with a now-famous Ronald Reagan quote, Boebert entreats Nancy Pelosi in the video to “tear down this wall.” And by wall she means the fence that was erected to protect her sorry ass from others, like her, who believe in belief over law.

And then, as the video ends, just after she orders the Speaker of the House of Representatives to tear this fence down, there’s a chilling sound effect: a shotgun blast, and the unmistakable sound of a shooter jacking a new round into the chamber to finish the job.

This bitch needs to go.

The arguments for both sides are so commonplace they make themselves. Free Speech, the very first amendment to our precious Constitution: We protect freedom of speech at all cost.

Not all cost, says the other side. You’re not allowed, for example, to yell fire in a crowded theater.

The quote, attributed to Supreme Court Justice Oliver Wendell Holmes, is one of the best known and most consistently mis-remembered legal opinions in history. While virtually everyone recalls – and cites – the quote as one cannot legally “shout ‘fire’ in a crowded theater,” the actual quote, written as part of a 1919 ruling, Schenck v. United States, was more specific: “The most stringent protection of free speech would not protect a man in falsely shouting fire in a theatre and causing a panic.”

And still, there are issues with this statement, which was clearly meant to be illustrative, not literal. For example, someone shouting “fire” in a theatre where there was actually a fire: that’s okay, right? And why a theatre? What about a food court? Or a public rest room? And how much of a panic is enough to make this actually illegal versus just a bad decision?

Many of these questions and nuances were debated almost immediately following the Schenck decision. For one thing, the idea of protecting citizens from false panics was very real at the time. At the turn of last century there were several high profile instances – one in Pennsylvania, in fact – in which people died after someone purposely created a stampede for nefarious reasons.

The worst of these occurred in Calumet, Michigan, in 1913, where striking copper miners and their families were celebrating Christmas Eve on the second floor of a meeting hall. They had gathered to make sure the children of the striking workers would have a hot meal and presents on Christmas. An unknown person, believed to be affiliated with the owners of the mine, burst into the building and yelled “fire” as more than 700 people were singing Christmas carols. This exact meeting hall had burned down before, and so the resulting panic was predictable. Seventy-three people were killed, trampled to death. Sixty-two of them were children. Trampled to death. On Christmas Eve.

According to a journal article published by the William and Mary Law School Scholarship Repository, just one year after Schenck, United States Attorney General Mitchell Palmer said, “A man may say what he will, as has often been said; but if he cries ‘fire’ in a crowded theater, with the intent to injure the people there assembled, certainly his right of free speech does not protect him against the punishment that is his just desert [sic].”

The article further states, “The question in every case is whether the words used…are of such a nature as to create a clear and present danger that they will bring about the substantive evils that Congress has a right to prevent.”

In January of this year, Donald Trump stood in front of a crowd of thousands and said a bunch of things. Among them:

Reasonably, did his words “create a clear and present danger?” Many, if not most, say yes. And people died.

Now let’s go back to Lauren Boebert. Clearly her career in politics thus far has hinged on being an outspoken advocate for gun owners, among other things. It’s part of her personal brand. So here she is, 60 days after the Capitol riots, creating and distributing a video that ridicules the money spent on protecting herself and her colleagues from armed vigilantes (i.e. her supporters); and demanding the barrier be removed. And then a sound cue – what we in advertising used to call a stinger – of a shotgun blast.

Is this an implicit threat, delivered as it is by a woman who will not be separated from her firearm of choice? Does it indicate a clear and present danger to US citizens, including the legislators themselves? Is it protected by the Constitution? He’s dead, of course, but I feel like Oliver Wendell Holmes would agree this juicy piece of self-promotional propaganda checks all the important boxes and isn’t protected by any law, let alone the US Constitution.

Remember that Christmas Eve in Calumet, Michigan? The man who witnesses say had a “Citizen’s Alliance” button on his coat, who yelled, “Fire!” in a crowded meeting hall, probably didn’t mean to kill anyone. He was probably hired, or at least inspired, by someone else, someone in power at the local mining company. His intention was probably to ruin the evening for some miners and their families, make them feel uneasy, make them feel vulnerable. Remind them who is boss.

Instead dozens of children were trampled to death. On Christmas Eve.

No one was ever convicted for this crime. Gung-gung.

Let’s take a lesson from history. We don't have to look back to 1913. We can go back to, oh, I don't know...how about January 6? But let’s learn from our mistakes. Or, as another popular quote reminds us, we will be doomed to repeat them.