This post is essentially a rant. It was cathartic to write and moderately fun to read back, but if you are looking for something soulful, thought provoking and/or unique in its point of view, this ain’t it.  If, however, you feel like a trip through the junk food drive-thru, and aren’t tired of hearing from me yet (four times in a week? unheard-of!), I invite your review.

Thanks to my daughter for her advice on how and if I should proceed on this one. I don’t want to abuse the valuable place I have earned in your crowded mindspace. 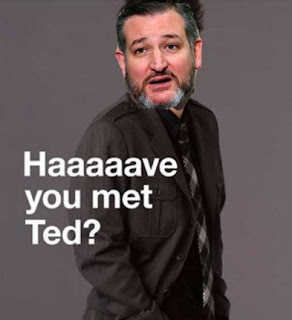 I try not to be self-indulgent, but when two of my blog posts intersect in real life I see it as a mandate from Valhalla that I need to weigh in.

Not long ago, I talked about my Mandalorian crush, Gina Carano, and how destroyed I was that her desire to be Republican outweighed her desire to be a hero to millions of young women. Not long after, I wrote about Ted Cruz, an absolute dirtball who represents passionate self-interest while being paid for public service.

Well, leave it to the two of them to find each other. After publicly calling his Houston neighbors assholes for outing his plan to skedaddle out of his home state of emergency for a week of R and R in Mexico, Teddy took to Twitter with the following observation:

Texan Gina Carano broke barriers in the Star Wars universe: not a princess, not a victim, not some emotionally tortured Jedi. She played a woman who kicked ass & who girls looked up to. She was instrumental in making Star Wars fun again. Of course Disney canceled her.

Oh, Ted, Ted, Ted. I really do believe you've gone unbelievably far in your career for someone with profound mental and character deficits. Or is it just the lasting damage of a career in politics? Let's break it down, so you can begin to learn from your mistakes:

not a princess, not a victim, not some emotionally tortured Jedi. Wait - so your plan is to sh*t all over Carrie Fisher? You're a bigger princess than she was, Teddy boy. She was a General, and a boss. You're a reprehensible toad who didn't defend his wife's honor, blames his kids for controlling your mind and thinks the problem with your vacation plans is that your neighbors have big mouths.

She played a woman who kicked ass & who girls looked up to. She was instrumental in making Star Wars fun again. Okay, you're back on course now. Good Ted.

Of course Disney canceled her. And there's the snap.

***
For the record now, and I will talk slow and use really small words:
When someone pays you money, they get to decide what job you're supposed to do and, ultimately, how they would like it done.
Stay with me, Ted, there's some important learning to be done here.
Disney gets its money from people who consume their entertainment: films, TV, amusement rides and really big turkey legs. If people decide to give Disney less money, let's say because, ummm, one of their marquee players in a tentpole television series makes many references about how Trump-crazed conservatives are being victimized - even evoking a comparison to Jews during the Holocaust - then Disney gets to re-evaluate their employment choices. Not to subjugate strong women, but to appease decent people and, maybe, actual victims.
But mostly to protect their revenue stream.
Think about it, Ted: Who did Captain America fight against? Nazis! Disney doesn't like Nazis. Nazis are bad for business, unless they are getting their faces melted off by Harrison Ford! If you work for Disney, ix-nay on the azi-nays.
It's not completely different from your situation. You have a high-paying job, too. And like Gina, a lot of people have to hand over their money to a huge organization so that you get paid. Now, unlike Gina's situation, it's harder for the people to get what they want when their US Senator is a coward and a liar. They can't just say, "Hey! Fire him or we will stop paying taxes!" No, they may have to wait a while longer, and get a little uglier; government just isn't run as efficiently as the private sector.
But make no mistake: The people will win. Every time.
What you and Gina should remember is what you control, and what you do not. You control what you say, and to whom. You control how you act. You control how you raise your kids. Neither God nor the Constitution says you have the right to get paid by someone, or a lot of someones, and then do whatever you want. I mean, sure, you can do whatever you want but if what you do impacts the people writing the check, you need to find a new gig.
Or make a different decision.
***
Here's the really crazy part. If you had apologized, sincerely, come clean and been genuinely remorseful that you took advantage of your privilege - the privilege afforded you by the residents of your state - to have a party while they were dying, I think many, if not most, Texans would have forgiven you. Even when people are cold and hungry and scared and sick, they can recognize humanity; they understand the fault in our wiring.
But you didn't do that. You lied. Then you danced. Then you came home with your head hung, hoping you could just whistle past it. And maybe you still can. Your constituents seem to have superhuman powers of tolerance for bullshit.
The point is, you should have thought first. And when you didn't, you should have apologized and meant it. And when you didn't, you should at least shut your damn mouth and stop throwing shade on others and the decisions they make in service of their people. In service of their paycheck.
It's nice that Gina felt passionately about her politics. She absolutely has the right to speak about them. But not without comment; and not without consideration of the people paying her to represent their brand.
It's nice that you feel passionately about your place in society, that you feel grateful you and your family are above the annoying little things that plague common people, like electricity. You have the absolute right to fly off to someplace warm. But not without comment; and not without consideration of the people paying you to represent their interests.
I can't believe this basic understanding escapes you. I look forward to your reckoning.

July 07, 2021
Bless me readers, for I have sinned. It's been 90 days since my last post. I feel bad about it but don't worry - not bad enough to bore you with all the carefully reasoned rationalizations for my absence. But I had to take TWO STINKING MINUTES out of my important work day to let you know that the former president, who Spike Lee refers to as "Agent Orange," (that's funny, I don't care how you vote!), is suing big Social Media, and their CEOs as individuals, for censorship. In particular the article reads , "The three related lawsuits, filed in federal court in Florida, allege the tech giants have violated plaintiffs’ First Amendments rights." Those of you who read even one of my three-part series in April about this very topic will remember, "The First Amendment doesn’t guarantee any of us unrestricted speech. It only protects us from government censorship. Said another way, neither the Constitution nor the Bill of Rights says you have the legal
Post a Comment
Read more