Friends, this is it. The Rubicon.

When next we speak everything will be different, no matter the outcome of the election. Face it, we may not even know who won by this time next week. Or multiple parties could be touting different results. But it will be over and we will be forever changed.

Some of you have already voted, by mail or in person. Some will brave long lines and potential viral attack to vote tomorrow, November 3. Regardless, it's going to be a long, trying day. It will be a day that tests us as human beings, as Americans. And that is why it's my belief that we all need a unifying cry, a nonpartisan mantra to comfort us, align us, and keep us strong. 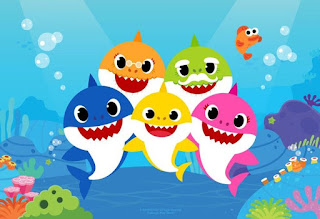 You're welcome. If you're a parent of children younger than 25 the mere appearance of the words "Baby Shark" has activated a nuclear ear worm in your brain so that you are now singing "doo doo doo doo doo," involuntarily. This will go on for a minimum of 10 minutes to a potential maximum of 11 years, give or take.

If you are among the unindoctrinated and actually clicked the link, my apologies and welcome to the Club. We meet Thursdays, and next week it's your turn to bring snacks.

If you think I'm sadistic for foisting this upon you, perhaps you have a point. But it's not something I invented completely out of the blue. On the contrary, as of today this little ditty has become the most watched video in You Tube history with more than 7 billion views. And if, like me, you were frantically trolling the headlines in search of anything not containing the words "Biden" or "Trump" or "electoral" or "margin," you might just as easily have stumbled across this yourself.

It's topical! Just go with it.

Seven billion views. That's almost one view for every man, woman and child on the planet Earth. But since You Tube doesn't exist in some places yet - or is inaccessible to many families - it's safe to assume some kids have watched it a few times, effectively blowing the curve for the rest of us.

My kids learned this song in nursery school, which means we all learned this song when they were in nursery school. It is the second most destructive song in contemporary Western culture, behind The Chicken Dance, which has the added claim of having absolutely no lyrics. Some day I will come clean about my clinical disorder involving The Chicken Dance. It's traumatic, I warn you.

On reflection, I guess I am kind of sadistic.

This past Saturday, John Mulaney hosted Saturday Night Live. I am not a critic when it comes to John Mulaney, I am a fan. I watched every bit, and enjoyed them immensely - particularly the Headless Horseman sketch. (I'm not going to link to that, not in the same post I linked to Baby Shark, it just wouldn't be right.) In his opening monologue Mulaney reminded us that there's "an old man contest" this week, and that we should remember to vote "early and often." He then said not to worry, nothing important would change anyway, and launched into a scenario about an unpopular girl who gets ostracized at a sleepover. I know, I know, it doesn't sound funny when I say it but that's why Mulaney is a genius and I work in insurance.

His monologue inspired outrage from, it appears, everyone. Both sides. People accused Mulaney of trying to "take both sides." (What? This is the guy who famously compared President Trump to a horse in a hospital.) They also said he was encouraging people not to bother to vote in the most important election of our lifetime. Why? Because he said, as part of the set-up to a joke, nothing will change anyway?

It's ironic, since in that "horse in a hospital" bit, he opens with the observation that, "it seems like everyone, everywhere, is super-mad about everything, all the time." Indeed. And that was a couple years ago! Today you literally cannot say hello without someone demanding what the hell you meant by that. Is it going to be this way forever? Statistically it's doubtful.

But I've been wrong before.

Which brings me back to my original thought, which is: We need something else to think about, something we can all share. Something that will bind us together. There are some tried and true, proven strategies. We can wage war against a common enemy, for example. But that could take years and cost tens of thousands of lives. And, as we've learned, the effect is temporary at best.

For my money, I'm going with Baby Shark.

September 01, 2020
Kanye West for President. No, wait – I’m sorry – that wasn’t an endorsement, I was just reading aloud, shaking my head and rummaging around the kitchen for more bourbon. If you’re in Pennsylvania, you don’t need to worry because he won’t be on the ballot. But let’s be clear: if you do, for any reason, feel compelled to throw your vote away in an entirely invisible gesture that seems to say, “I don’t believe things could get any worse than they are right now, so let’s dance!” know that you can always write-in a vote for West, or his wife Kim , or their daughter North .  Short aside: While I condemn Kanye and Kim for imposing their dipshit reality-show-gone-awry cooties on their progeny, a not-small part of me is absolutely salivating at the prospect of an autobiography from their first born someday. It would be called North by North West , and she would have no idea why that’s funny. I am not a rap fan, which will not surprise anyone. Although I knew his name, I first became aware of K
Post a Comment
Read more