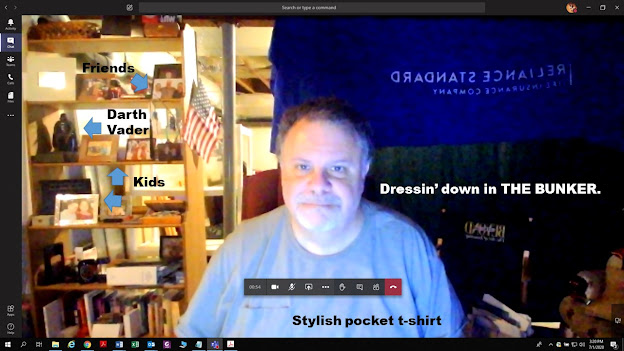 I mean, I notice what other people are wearing. I don’t say anything about it, of course, but I take notice. A lot of my colleagues, including my boss, wear layers. Like a T-shirt or collared shirt with a pullover. Usually a quarter- or half-zip. Very clean and casual, very preppy. I can’t really pull off that look. I mean I can wear those things, but I give off more of a Sopranos vibe than a “let’s meet in the men’s grill after 18 holes” vibe.
And some definitely do the “I’m going to look like I’m at work even though you can see my laundry hanging over the door behind me” thing. I used to think, “Good for you! You’re not afraid to commit.” But now, since the article, I wonder: Am I being played? When we disconnect from our call, are they stripping off the powder blue oxford button-down and sitting in a stained muscle shirt?
I don’t know about you, but just thinking about that kind of ruins it for me. Not just because I wasn’t smart enough to figure it out myself. Well…that too. But also because I value integrity. I always taught my kids to be comfortable with who they are, be confident in their self-worth. Of course, I also taught them to be articulate and polite and not to get tattoos anyplace visible, just in case they want to get a job someday. (One heard me, one didn’t; but the good news is, the one who didn’t heed that advice is grooming himself for a job in which tattoos are prerequisite.)
Aren’t those things, the little niceties of business etiquette, still a constant? Just because I am in my basement and have to trudge upstairs to pee and pet the cat, why should I be any less committed to looking the part when the curtain rises?
It’s an interesting question. One I will ponder, unshaven and sockless, over the long holiday weekend.

September 01, 2020
Kanye West for President. No, wait – I’m sorry – that wasn’t an endorsement, I was just reading aloud, shaking my head and rummaging around the kitchen for more bourbon. If you’re in Pennsylvania, you don’t need to worry because he won’t be on the ballot. But let’s be clear: if you do, for any reason, feel compelled to throw your vote away in an entirely invisible gesture that seems to say, “I don’t believe things could get any worse than they are right now, so let’s dance!” know that you can always write-in a vote for West, or his wife Kim , or their daughter North .  Short aside: While I condemn Kanye and Kim for imposing their dipshit reality-show-gone-awry cooties on their progeny, a not-small part of me is absolutely salivating at the prospect of an autobiography from their first born someday. It would be called North by North West , and she would have no idea why that’s funny. I am not a rap fan, which will not surprise anyone. Although I knew his name, I first became aware of K
Post a Comment
Read more